Neighbor and Home, panel presentation at Arts in the One World conference 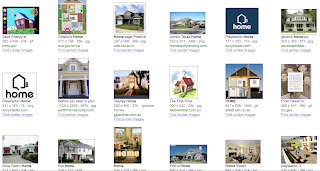 Below is the text of a presentation I did for a panel entitled Performing Providence. I would like to develop it further as an essay and would be interested in your feedback.

The title of the panel raised a question for me about what it is exactly that I’m performing? And by the way, I’m a reluctant performer at best. The conversations at this conference have helped me clarify what I think I’m performing about our yearning for home.  First of all I need to distinguish between house and home and underscore that while house and home may overlap geographically, home is an idea that cannot fit under the roof of one “house”. My project grew out of my belief that neighborhood ought to be something closer to the idea of home. But in Providence as elsewhere in North America, what’s happening to our neighborhoods is another dimension of colonization. Neighborhoods have been confiscated by the real estate industry, and our desire for home has been commodified (see image above, google image search for "home").

Because I only have 10 minutes, I’m going to inelegantly make a crude connection between the global and the local. In this country, the privileged (house owners) enjoy comforts at the expense of others in the world. We live in a culture of empire. My project emerged out of my realization that I’m complicit. I own a house, and I was taken in by the housing industry’s seductive message that I could own a beautiful “home”. But what I own is a house in a neighborhood in which people keep to themselves, euphemism for isolationism. Like the neighborhood I grew up in, the walls of our houses keep us divided up into nuclear units; they protect “our privacy”, protect us from each other--what that means is that our houses keep us out of each other’s business, so fathers can abuse daughters (in private), miserable traumatized teenagers can abuse substances (in private), partners beat up the ones they love (in private). Meanwhile a tiny class of financiers have got about 68% of us chained to our mortgage debts, while home equity keeps dropping lower and lower. What that means is that more and more of us are paying less and less of the actual money we owe on our houses. So do we really own the houses? Or are we owned by mortgage debt? 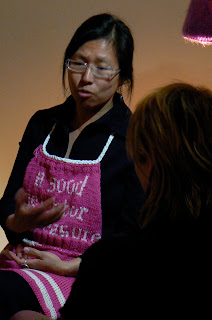 Now, I’m talking with you at a conference at Brown University. I don’t talk like this when I’m “performing Providence.” I’m performing now to inspire moral outrage (an article in Truthout recently reported on studies that have compared strategies for provoking social change and found moral outrage to be more effective than compassion). I’m performing artist-scholar framing my work on local neighborhoods in a more global context. When I perform Providence, I put on pink knitted aprons and embroidered tunics and I ask innocently, “what’s your neighborhood like? How has your neighborhood changed?” A friend once told me I’m disarming. Yes, I like that to think about my performance as a form of “disarmament” by needle arts (crochet) and handicraft. (And here I want to make a side note about technology and the assumption that advanced technology is inherently good for the world. I think we need to question that assumption).

We were having trouble meeting neighbors and really wanted to find playmates for Mica (there seemed to be lots of friends for Chi). So I just decided to start knocking on my neighbors doors. We didn’t find friends, but I did begin to hear stories and then started asking, why do neighborhoods feel so different than they did when I was a kid? Who are my neighbors anyway, and can’t we help each other out? Can’t we be more neighborly? Wasn’t there a time when neighborhoods were more like community?

So when I first began this project, I was just trying to be a good mom, find friends for my son, and hoping that I could make art, too. I told a story, in a theater, and the audience told stories. Where the highway is now, there used to be block parties right in front of grandma’s house. Where Rhode Island College now stands there used to be a pond on the banks of which neighbors could enjoy sunset walks. Where the neighborhood is primarily Hispanic and African American, there’s an abandoned synagogue the inside of which no one has seen for decades, and no one in the neighborhood knows why the Jewish folks no longer live there. Where you see new construction of condos, flocks of cape-wearing boys used to ride their bikes in the streets and jump off rooftops of garages. Where you now see beautifully restored “historic” homes my African American friend’s grandmother used to have a beauty parlor, and every evening you could smell greens cooking all up and down the street. Many stories of displacement and erasure of the past.

I listened to myself tell this last story, and felt in my body that it was not the body in which this story needed to inhabit. My friend who told me about his grandmother’s beauty parlor needs to tell this story. Since then I’ve become even more rigorous about reflecting on the ways stories change when we re-present them. Hearing myself tell the story, I recognized I was pretending, creating an illusion, a mimicry. (Homi Bhabha might say the effect of mimicry is to camouflage us, to absorb us into the background.) I don’t want to create camouflage. I want to create spaces in which we can learn to live with each other, through conflict, in conflict, to live with each other in neighborhoods that are also our communities.

So ... now I’ll tell one of my stories, the story of my current home. At the signing of the papers and the checks, the attorney told me that her title search revealed a restrictive covenant on the deed to my house. It said that no persons of Chinese descent may buy this house. That was visible evidence of the legacy of racism. I’ve gone down to the town hall of North Providence to try to find this covenant and document my search. The first time the clerk got nervous about the video camera and said I needed permission from the mayor to videotape in Town Hall. I left my flyers, wrote a letter, called the mayor, never heard anything. So the next time I went, I waited until she got the big book out and then asked if I could videotape the book. I haven’t found the actual clause yet, but you can be sure these restrictive covenants still exist.

Neighbor to Neighbor was invented to rescue my home from this legacy of racism. But I’ve found that my intentions have changed. As I’ve gotten to know the people who live in the houses near me, I have found that the neighborhood I live in is very diverse. The Mafia may have moved to North Providence, but they won’t talk to me. Many of my other neighbors will, though, and they’ve shown me that we can create a sense of community between our houses. I was just stopped on my way home from the bus by a new neighbor who said, “oh you look so much like my friend in Brazil!” She invited me to dinner and to play music with them. I’ve found that many of the houses in my neighborhood shelter elderly folks afraid they’re about to be shipped off to nursing homes by their children. I’ve gotten to know Claire Andrade Watkins who introduced me to the notion of “first voice” and who grew up in Fox Point where an entire, vibrant community of Cape Verdeans has been displaced by the highway. I’ve gotten to know neighborhood organizers like Jim Tull who introduced me to John McKnight, whose book, “A Careless Society” talks about how well-intentioned social services have contributed to the erosion of community networks. Nursing homes warehouse our elderly, schools warehouse our children. Neighbors no longer feel safe to ask each other for help.

My performance work has made it so clear what we do share, and what we can share. I’m beginning here on my dress to map my neighborhood. I believe very much in the power of maps, so I was delighted to see Nitin’s mapping with children their village that has not been officially mapped. My unofficial map will show my neighbors the skills and knowledge we have amongst us that we can share. One of us is a horseman and could help cultivate my younger son’s love of horses and animals. One of us is a beautiful gardner. One of us knows all things computer. Some of us love to listen to stories about the old days.

Sandeep said he thought the desire for home is the cause for much violence. I want to respectfully challenge that idea. I believe it’s the commodification of home that is the source of much violence. It’s a construction of home that serves the real estate industry, rather than those of us trying to make home in the world. It’s the making of home at the expense of others, the construction of homes that necessitates the erasure of an “other”. As a feminist mother of a teenager and a 10-year old who has tried to keep the making of home, making of income and making of art integrated, not compartmentalized, I believe that we can and must reclaim our domestic spaces. It has been said that “Home is where the heart is.” I believe making home is akin to making love. Home is a place of love, a sacred space. In Pedagogies of Crossing, Jacqui Alexander writes, “Home is multiply valenced, a space and place in which Time centers the movement of Sacred energies; a place where those who walk with you--Orisha, Lwa, Spirit--live and manifest (drop in) apparently impromptu, or when called to work...Home is a set of practices, as John Berger notes, and at the heart of those practices are those that mark its conversion into a spiritual workplace.” (p 328)

So I end on the challenge to us all to look with eyes and heart wide open at the politics of home. We must make home a safe space in which to prepare our children for conflict, to fight the battles that need to be fought, to arm ourselves with creativity, compassion and love. I believe in a politics of love. So what is it that I’m performing when I perform Providence? I hope that I practice and perform a politics of love.
Posted by Ju-Pong at 1:04 PM No comments: 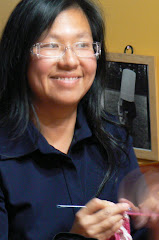